The Washing of the Feet by James Tissot 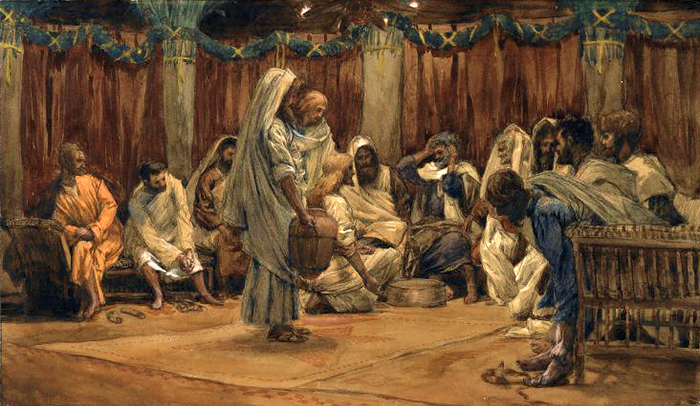 The Washing of the Feet by James Tissot

“When I came into this chamber tonight, you were not content proudly to refuse to wash one another’s feet, but you must also fall to disputing among yourselves as to who should have the places of honor at my table. Such honors the Pharisees and the children of this world seek, but it should not be so among the ambassadors of the heavenly kingdom. Do you not know that there can be no place of preferment at my table? Do you not understand that I love each of you as I do the others? Do you not know that the place nearest me, as men regard such honors, can mean nothing concerning your standing in the kingdom of heaven? You know that the kings of the gentiles have lordship over their subjects, while those who exercise this authority are sometimes called benefactors. But it shall not be so in the kingdom of heaven. He who would be great among you, let him become as the younger; while he who would be chief, let him become as one who serves. Who is the greater, he who sits at meat, or he who serves? Is it not commonly regarded that he who sits at meat is the greater? But you will observe that I am among you as one who serves. If you are willing to become fellow servants with me in doing the Father’s will, in the kingdom to come you shall sit with me in power, still doing the Father’s will in future glory." ~ The Urantia Book, 179:3.9