Christ and the Samaritan by the fountain by Angelika Kaufmann 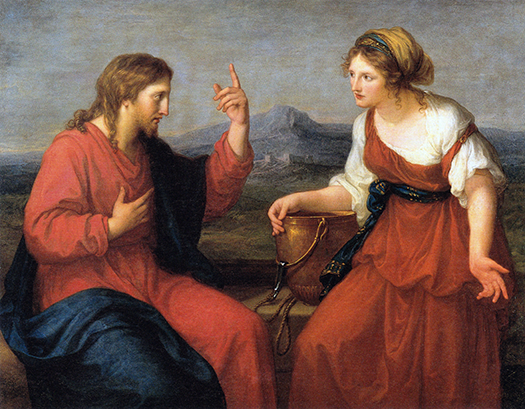 A Human Soul Who Desired Salvation

But Nalda [the Samaritan woman]would make one more effort to avoid the discussion of the embarrassing question of her personal life on earth and the status of her soul before God. Once more she resorted to questions of general religion, saying: “Yes, I know, Sir, that John has preached about the coming of the Converter, he who will be called the Deliverer, and that, when he shall come, he will declare to us all things"—and Jesus, interrupting Nalda, said with startling assurance, “I who speak to you am he.”

This was the first direct, positive, and undisguised pronouncement of his divine nature and sonship which Jesus had made on earth; and it was made to a woman, a Samaritan woman, and a woman of questionable character in the eyes of men up to this moment, but a woman whom the divine eye beheld as having been sinned against more than as sinning of her own desire and as now being a human soul who desired salvation, desired it sincerely and wholeheartedly, and that was enough. ~ The Urantia Book, 143:5.7