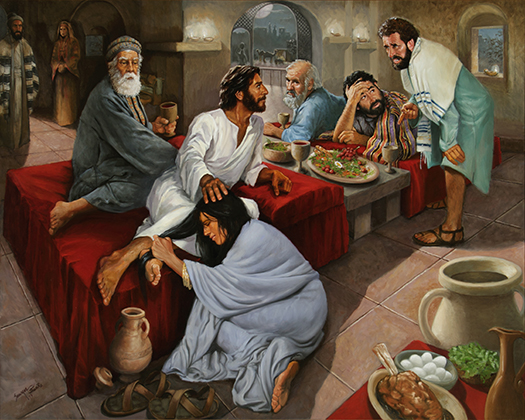 The Turning Point by Stephen Sawyer and Slawa Radziszewska

Six days before the Passover, on the evening after the Sabbath, all Bethany and Bethphage joined in celebrating the arrival of Jesus by a public banquet at the home of Simon.

Nothing out of the ordinary happened until near the close of the feasting when Mary the sister of Lazarus stepped forward from among the group of women onlookers and, going up to where Jesus reclined as the guest of honor, proceeded to open a large alabaster cruse of very rare and costly ointment; and after anointing the Master’s head, she began to pour it upon his feet as she took down her hair and wiped them with it. The whole house became filled with the odor of the ointment, and everybody present was amazed at what Mary had done. Lazarus said nothing, but when some of the people murmured, showing indignation that so costly an ointment should be thus used, Judas Iscariot stepped over to where Andrew reclined and said: “Why was this ointment not sold and the money bestowed to feed the poor? You should speak to the Master that he rebuke such waste.”

Jesus, knowing what they thought and hearing what they said, put his hand upon Mary’s head as she knelt by his side and, with a kindly expression upon his face, said: “Let her alone, every one of you. Why do you trouble her about this, seeing that she has done a good thing in her heart? To you who murmur and say that this ointment should have been sold and the money given to the poor, let me say that you have the poor always with you so that you may minister to them at any time it seems good to you; but I shall not always be with you; I go soon to my Father. This woman has long saved this ointment for my body at its burial, and now that it has seemed good to her to make this anointing in anticipation of my death, she shall not be denied such satisfaction. In the doing of this, Mary has reproved all of you in that by this act she evinces faith in what I have said about my death and ascension to my Father in heaven. This woman shall not be reproved for that which she has this night done; rather do I say to you that in the ages to come, wherever this gospel shall be preached throughout the whole world, what she has done will be spoken of in memory of her.”