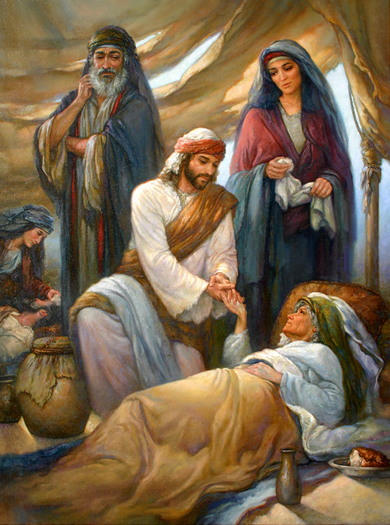 In connection with the seaside encampment, Elman, the Syrian physician, with the assistance of a corps of twenty-five young women and twelve men, organized and conducted for four months what should be regarded as the kingdom's first hospital... Jesus visited the sick of this encampment not less than three times a week and made personal contact with each sufferer. As far as we know, no so-called miracles of supernatural healing occurred among the one thousand afflicted and ailing persons who went away from this infirmary improved or cured. However, the vast majority of these benefited individuals ceased not to proclaim that Jesus had healed them.

Many of the cures effected by Jesus in connection with his ministry in behalf of Elman's patients did, indeed, appear to resemble the working of miracles, but we were instructed that they were only just such transformations of mind and spirit as may occur in the experience of expectant and faith-dominated persons who are under the immediate and inspirational influence of a strong, positive, and beneficent personality whose ministry banishes fear and destroys anxiety.

By the time the camp at Bethsaida had been broken up, the fame of Jesus, particularly as a healer, had spread ...For weeks after they left Bethsaida, the sick continued to arrive, and when they did not find the Master, on learning from David where he was, they would go in search of him. On this tour Jesus did not deliberately perform any so-called miracles of healing. Nevertheless, scores of afflicted found restoration of health and happiness as a result of the reconstructive power of the intense faith which impelled them to seek for healing.