The Healing of Blind Bartimaeus by Harold Copping 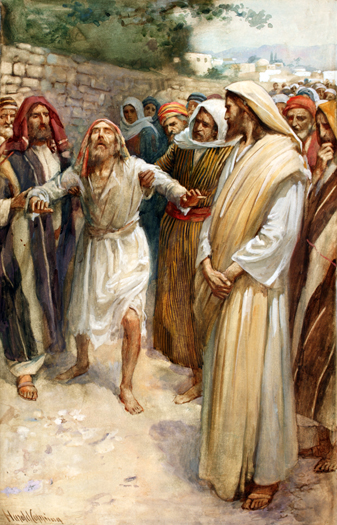 The Healing of Blind Bartimaeus by Harold Copping

Late on the afternoon of Thursday, March 30, Jesus and his apostles, at the head of a band of about two hundred followers, approached the walls of Jericho. As they came near the gate of the city, they encountered a throng of beggars, among them one Bartimeus, an elderly man who had been blind from his youth.

When Bartimeus heard that Jesus was near, he lifted up his voice and began to cry aloud, "Jesus, Jesus, have mercy upon me!"

When Jesus heard the blind man crying out, he stood still. And when he saw him, he said to his friends, "Bring the man to me."

When Bartimeus heard these words, he threw aside his cloak, springing forward toward the center of the road, while those near by guided him to Jesus.

Addressing Bartimeus, Jesus said: "What do you want me to do for you?" Then answered the blind man, "I would have my sight restored." And when Jesus heard this request and saw his faith, he said: "You shall receive your sight; go your way; your faith has made you whole." Immediately he received his sight, and he remained near Jesus, glorifying God, and then he went before the multitude declaring to all how his sight had been restored in Jericho.