I am He by Walter Rane 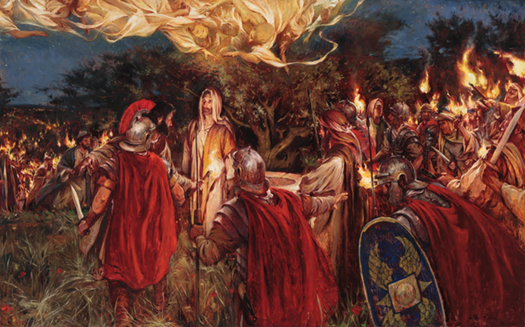 I am He by Walter Rane

Jesus made one last effort to save Judas from actually betraying him in that, before the traitor could reach him, he stepped to one side and, addressing the foremost soldier on the left, the captain of the Romans, said, “Whom do you seek?” The captain answered, “Jesus of Nazareth.” Then Jesus stepped up immediately in front of the officer and, standing there in the calm majesty of the God of all this creation, said, “I am he.” Many of this armed band had heard Jesus teach in the temple, others had learned about his mighty works, and when they heard him thus boldly announce his identity, those in the front ranks fell suddenly backward. They were overcome with surprise at his calm and majestic announcement of identity. There was, therefore, no need for Judas to go on with his plan of betrayal. The Master had boldly revealed himself to his enemies, and they could have taken him without Judas’s assistance. But the traitor had to do something to account for his presence with this armed band, and besides, he wanted to make a show of carrying out his part of the betrayal bargain with the rulers of the Jews in order to be eligible for the great reward and honors which he believed would be heaped upon him in compensation for his promise to deliver Jesus into their hands. ~ The Urantia Book, 183:3.4