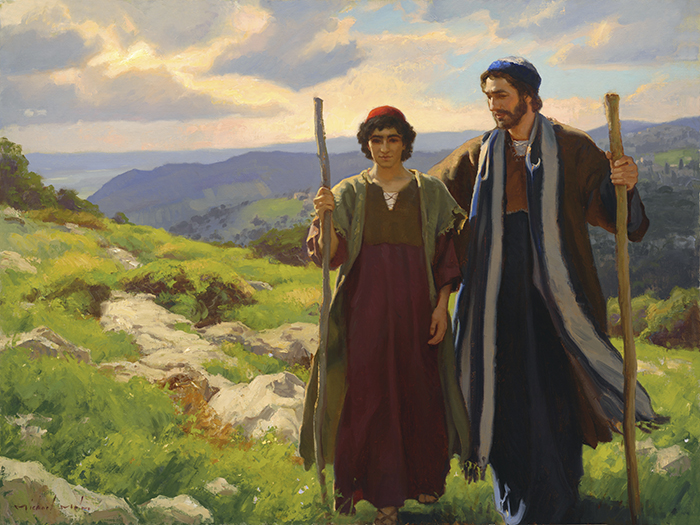 It is an exciting time, as we are adding to the Gallery of Jesus paintings on TruthBook again! This time it’s not only a new painting but a new artist, too! Introducing Michael Malm, creator of our newest Jesus painting titled Young Jesus with Joseph.

Here’s some background about Mike, From Southwest Art, April 12, 2013:

"Out the north windows of Malm’s studio, a few steps away from the home he shares with his wife, Juanita, and their four children, are wide-open views of farmland in northern Utah’s picturesque Cache Valley. With its pastures, wooded areas, streams, and ponds, the valley provides both inspiration and physical backdrops for much of the 41-year-old artist’s work.

"Because religion is a central part of Malm’s life, another focus of his art involves visual interpretations of Bible scenes. These are the artist’s personal explorations into the spiritual meaning and messages of ancient stories he has known all his life."

We feel fortunate indeed that this talented artist agreed to depict a scene from The Urantia Book in his unique style. Urantia Book readers will remember that Sabbath walks with Joseph were a feature of Jesus’ early home life; and in this scene we see the father and son as they stroll through the verdant hills above Nazareth; it’s a beautiful day as the pair enjoy each other’s company, Joseph talking to the lad of matters we can only imagine. It is such a wonderfully human scene, one that shows the young lad in the protective, intimate company of his beloved father as they enjoy an afternoon hike.

"Nazareth was one of the twenty-four priest centers of the Hebrew nation. But the Galilean priesthood was more liberal in the interpretation of the traditional laws than were the Judean scribes and rabbis. And at Nazareth they were also more liberal regarding the observance of the Sabbath. It was therefore the custom for Joseph to take Jesus out for walks on Sabbath afternoons, one of their favorite jaunts being to climb the high hill near their home, from which they could obtain a panoramic view of all Galilee. To the northwest, on clear days, they could see the long ridge of Mount Carmel running down to the sea; and many times Jesus heard his father relate the story of Elijah, one of the first of that long line of Hebrew prophets, who reproved Ahab and exposed the priests of Baal. To the north Mount Hermon raised its snowy peak in majestic splendor and monopolized the skyline, almost 3,000 feet of the upper slopes glistening white with perpetual snow. Far to the east they could discern the Jordan valley and far beyond the rocky hills of Moab. Also to the south and the east, when the sun shone upon their marble walls, they could see the Greco-Roman cities of the Decapolis, with their amphitheaters and pretentious temples. And when they lingered toward the going down of the sun, to the west they could make out the sailing vessels on the distant Mediterranean.

"From four directions Jesus could observe the caravan trains as they wended their way in and out of Nazareth, and to the south he could overlook the broad and fertile plain country of Esdraelon, stretching off toward Mount Gilboa and Samaria.

"When they did not climb the heights to view the distant landscape, they strolled through the countryside and studied nature in her various moods in accordance with the seasons. Jesus' earliest training, aside from that of the home hearth, had to do with a reverent and sympathetic contact with nature."

And this is not the only reference to the strolls that Jesus enjoyed, either alone or in the company of his father. The Urantia Book describes other instances of Sabbath hikes into the serenity of Nature; and as we see in these passages from The Urantia Book, even after the untimely death of his beloved earthly father, Joseph, Jesus maintained this practice with his brothers and sisters.

124:2.1 It was the fifth of July, the first Sabbath of the month, when Jesus, while strolling through the countryside with his father, first gave expression to feelings and ideas which indicated that he was becoming self-conscious of the unusual nature of his life mission.

127:3.8 Several times a year, when visitors were not present thus to function, Jesus continued to read the Sabbath scriptures at the synagogue … He never failed, weather permitting, to take his brothers and sisters out on Sabbath afternoons for their nature strolls.

128:7.8 Jesus spent a great deal of time this year with the individual members of his family. He would take them for long and frequent strolls up the hill and through the countryside.

It is so refreshing and uplifting to see yet another story that is unique to The Urantia Book depicted in this fine-art style, painted by such a talented artist. Michael Malm now joins the roster of other artists whose work comprises the Jesus Paintings section of TruthBook’s Religious Art Gallery. The painting can be viewed there any time, where it will reside with so many others that illustrate various stories from Jesus’ life, unknown before The Urantia Book.

As always, we invite you to share this painting and its story with your family and friends. These colorful and inspiring scenes of Jesus’ life help any student of the Master to understand him better and love him more. And now, Young Jesus with Joseph by Michael Malm can add to that understanding.

We expect even more paintings to be finished in the weeks and months ahead. As they become available, we will be sharing them with you!

Re: Young Jesus with Joseph: A new painting

This picture looks fascinating. I love stories about the youth of Jesus.
Post a reply
Switch to full style