The Search for the Historical Adam

Secularist brows furrowed in 2009 when President Obama chose prominent atheist-turned-Christian Francis S. Collins to be the director of the National Institutes of Health (NIH). Under the Los Angeles Times headline "Fit to Head the NIH?," Skeptic magazine's Michael Shermer fretted that Collins's beliefs might somehow corrupt America's biggest biomedical research agency. In a New York Times piece, atheist Sam Harris was similarly "uncomfortable," fearing in particular that a Collins administration might "seriously undercut" fields like neuroscience. Jerry Coyne, a University of Chicago expert on evolution, carped that the nominee's "scary," "bizarre," "inane," and "snake oil" ideas "pollute his science with his faith."

Nonetheless, Collins won unanimous U.S. Senate confirmation, thanks to sterling achievements in biomedical research and leadership of NIH's human genome research. Under Collins, this historic effort in 2003 finished mapping the complete sequence of several billion DNA subunits ("bases") and all of the genes that determine human heredity.

Collins, one of the most eminent scientists ever to identify as an evangelical Christian, staunchly defends Darwinian evolution even as he insists on God as the Creator. And he now stands at the epicenter of a dispute that increasingly agitates fellow believers. At issue: the traditional tenet (as summarized in Wheaton College's mandatory credo) that "God directly created Adam and Eve, the historical parents of the entire human race."

Collins's 2006 bestseller, The Language of God: A Scientist Presents Evidence for Belief—which so vexed those secularist critics—reported scientific indications that anatomically modern humans emerged from primate ancestors perhaps 100,000 years ago—long before the apparent Genesis time frame—and originated with a population that numbered something like 10,000, not two individuals. Instead of the traditional belief in the specially created man and woman of Eden who were biologically different from all other creatures, Collins mused, might Genesis be presenting "a poetic and powerful allegory" about God endowing humanity with a spiritual and moral nature? "Both options are intellectually tenable," he concluded.

In a recent pro-evolution book from InterVarsity Press, The Language of Science and Faith, Collins and co-author Karl W. Giberson escalate matters, announcing that "unfortunately" the concepts of Adam and Eve as the literal first couple and the ancestors of all humans simply "do not fit the evidence."

The Adam account in Genesis has long been subjected to scientific challenges, but "there was a lot of wiggle room in the past. The human genome sequencing took that wiggle room away" during the past decade, said Randall Isaac, executive director of the American Scientific Affiliation (asa), which has been discussing Adam issues for decades. The organization's 1,600 members, Collins among them, affirm the Bible's "divine inspiration, trustworthiness, and authority" on "faith and conduct," though not on scientific concepts.

The unnerving new genetic science was assessed with considerable detail in last September's issue of the ASA journal Perspectives on Science and Christian Faith. The articles were elaborated versions of papers delivered at the ASA's 2009 annual meeting at Baylor University, the organization's first major discussion of the Adam question that included religion scholars as well as scientists.

Two of the Perspectives writers, biblical exegete Daniel C. Harlow and theologian John R. Schneider, teach at Calvin College. As a result of their writings, a personnel panel has been investigating whether they violated the doctrinal standards that the college's sponsoring Christian Reformed Church requires of faculty. (The investigation follows procedures that were established when Calvin astrophysicist Howard J. Van Till stirred an earlier ruckus over creation—though not Adam and Eve—with his 1986 tome The Fourth Day.) Harlow and Schneider could face discipline from the board of trustees, and revived denominational debate about evolution seems inevitable. Meanwhile, Calvin scheduled 18 lectures on human origins this past academic year. 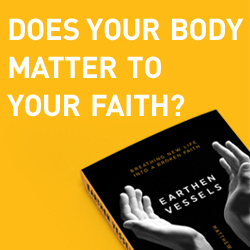 Giberson, a physics professor at Eastern Nazarene College, downplays the potentially vanishing Adam and Eve as "a secondary or peripheral disagreement that shouldn't cause us to hurl accusations of infidelity at one another." He thinks "this will percolate along as an issue and more of the evangelical church will become fine with it, despite Main Street objections. I don't see this issue splitting the church in some major way."

However, Michael Cromartie, the evangelicalism expert at Washington's Ethics and Public Policy Center, sees high stakes, calling the new thinking an "urgent" and "potentially paradigm-shifting" development with "huge theological implications …. How this gets settled is extremely important."

What May Be at Stake

Foundational confessions of faith from the Protestant Reformation assume a historical Adam, and official Roman Catholicism defined this teaching at the 1546 Council of Trent, in the 1950 encyclical Humani Generis of Pope Pius XII (who cautiously allowed leeway for humanity's bodily evolution), and in the 1992 Catechism of the Catholic Church. The broader public is intrigued, more so than by many other biblical topics; a 2005 Gallup Poll found that 40 percent of Americans think the various competing concepts of human origins matter "a great deal."

So, is the Adam and Eve question destined to become a groundbreaking science-and-Scripture dispute, a 21st-century equivalent of the once disturbing proof that the Earth orbits the sun? The potential is certainly there: the emerging science could be seen to challenge not only what Genesis records about the creation of humanity but the species's unique status as bearing the "image of God," Christian doctrine on original sin and the Fall, the genealogy of Jesus in the Gospel of Luke, and, perhaps most significantly, Paul's teaching that links the historical Adam with redemption through Christ (Rom. 5:12-19; 1 Cor. 15:20-23, 42-49; and his speech in Acts 17).

The rethinking on Adam is an outgrowth of mainstream evolutionary thought that has long been the object of evangelical hostility (though the hostility has always been hotter at the grassroots than among professional scientists). One option, which consistently enjoys support from at least 40 percent of the general public in Gallup surveys, is "young earth" creationism. As writers with Answers in Genesis, in commenting on recent developments, insisted, "God created the mature, fully functioning creation in six literal days about 6,000 years ago." If substantiated, this would of course demolish Darwinism because such a brief chronology offers no time for evolutionary processes to occur. Questions about that sort of time frame have provoked renewed defense of young earth creationism in Southern Baptist Convention circles. But even the late James Montgomery Boice, founding chair of the International Council on Biblical Inerrancy, which insisted on a historical Adam, thought various scientific findings make it "hard to believe" in a recent creation.

These are two pages excerpted from an 8-page article. Please click HERE to see the rest of this article. Research about Adam and Eve and God's creation of mankind in the light of scientific truth is destined to rattle a lot of long-held beliefs.

Discovering the truth about these two pivotal persons will indeed challenge the fundamental Bible-believer...the revelation of The Urantia Book sheds some welcome light and much intellectual satisfaction on this most interesting topic for those who have ears to hear.

Please go HERE to read The Urantia Book account of the story of Adam and Eve.