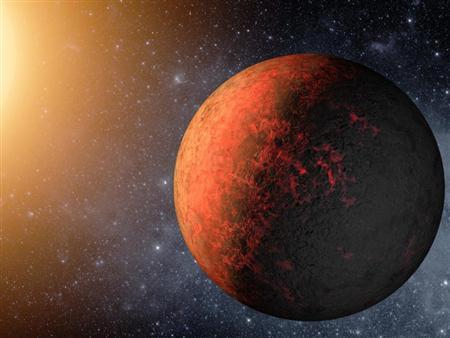 An artist's rendering shows a planet called Kepler-20e. The surface temperature of Kepler-20e, at more than 1,400 degrees Fahrenheit, would melt glass.

(Reuters) - NASA's Kepler mission has discovered the first Earth-size planets orbiting a sun-like star outside our solar system, a milestone in the search for planets like the earth, the space agency said on Tuesday.

The planets, called Kepler-20e and Kepler-20f, are the smallest planets outside the solar system confirmed around a star like the Sun, NASA said in a statement.

The planets are too close to their star to be in the so-called habitable zone where liquid water could exist on a planet's surface.

"This discovery demonstrates for the first time that Earth-size planets exist around other stars, and that we are able to detect them," Francois Fressin of the Harvard-Smithsonian Center for Astrophysics in Cambridge, Massachusetts, said in the statement.