I was born in Den Bosch, the city after which Hieronymus Bosch named himself. [1] This obviously does not make me an expert on the Dutch painter, but having grown up with his statue on the market square, I have always been fond of his imagery, his symbolism, and how it relates to humanity’s place in the universe. This remains relevant today since Bosch depicts a society under a waning influence of God.

His famous triptych with naked figures frolicking around — “The Garden of Earthly Delights” — seems a tribute to paradisiacal innocence. The tableau is far too happy and relaxed to fit the interpretation of depravity and sin advanced by puritan experts. It represents humanity free from guilt and shame either before the Fall or without any Fall at all. For a primatologist, like myself, the nudity, references to sex and fertility, the plentiful birds and fruits and the moving about in groups are thoroughly familiar and hardly require a religious or moral interpretation. Bosch seems to have depicted humanity in its natural state, while reserving his moralistic outlook for the right-hand panel of the triptych in which he punishes — not the frolickers from the middle panel — but monks, nuns, gluttons, gamblers, warriors, and drunkards. 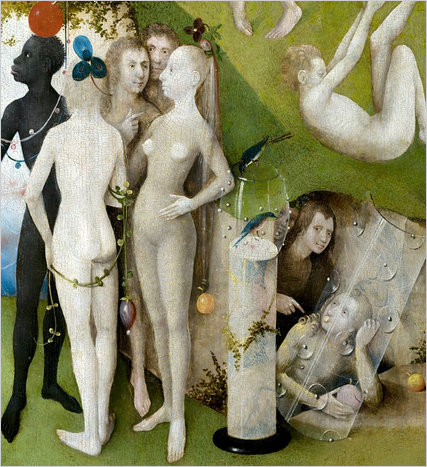 Five centuries later, we remain embroiled in debates about the role of religion in society. As in Bosch’s days, the central theme is morality. Can we envision a world without God? Would this world be good? Don’t think for one moment that the current battle lines between biology and fundamentalist Christianity turn around evidence. One has to be pretty immune to data to doubt evolution, which is why books and documentaries aimed at convincing the skeptics are a waste of effort. They are helpful for those prepared to listen, but fail to reach their target audience. The debate is less about the truth than about how to handle it. For those who believe that morality comes straight from God the creator, acceptance of evolution would open a moral abyss.

Echoing this view, Reverend Al Sharpton opined in a recent videotaped debate: “If there is no order to the universe, and therefore some being, some force that ordered it, then who determines what is right or wrong? There is nothing immoral if there’s nothing in charge.” Similarly, I have heard people echo Dostoevsky’s Ivan Karamazov, exclaiming that “If there is no God, I am free to rape my neighbor!”

Perhaps it is just me, but I am wary of anyone whose belief system is the only thing standing between them and repulsive behavior. Why not assume that our humanity, including the self-control needed for livable societies, is built into us? Does anyone truly believe that our ancestors lacked social norms before they had religion? Did they never assist others in need, or complain about an unfair deal? Humans must have worried about the functioning of their communities well before the current religions arose, which is only a few thousand years ago. Not that religion is irrelevant — I will get to this — but it is an add-on rather than the wellspring of morality.

Deep down, creationists realize they will never win factual arguments with science. This is why they have construed their own science-like universe, known as Intelligent Design, and eagerly jump on every tidbit of information that seems to go their way. The most recent opportunity arose with the Hauser affair. A Harvard colleague, Marc Hauser, has been accused of eight counts of scientific misconduct, including making up his own data. Since Hauser studied primate behavior and wrote about morality, Christian Web sites were eager to claim that “all that people like Hauser are left with are unsubstantiated propositions that are contradicted by millennia of human experience” (Chuck Colson, Sept. 8, 2010). A major newspaper asked “Would it be such a bad thing if Hausergate resulted in some intellectual humility among the new scientists of morality?” (Eric Felten, Aug. 27, 2010). Even a linguist could not resist this occasion to reaffirm the gap between human and animal by warning against “naive evolutionary presuppositions.”

These are rearguard battles, however. Whether creationists jump on this scientific scandal or linguists and psychologists keep selling human exceptionalism does not really matter. Fraud has occurred in many fields of science, from epidemiology to physics, all of which are still around. In the field of cognition, the march towards continuity between human and animal has been inexorable — one misconduct case won’t make a difference. True, humanity never runs out of claims of what sets it apart, but it is a rare uniqueness claim that holds up for over a decade. This is why we don’t hear anymore that only humans make tools, imitate, think ahead, have culture, are self-aware, or adopt another’s point of view.

If we consider our species without letting ourselves be blinded by the technical advances of the last few millennia, we see a creature of flesh and blood with a brain that, albeit three times larger than a chimpanzee’s, doesn’t contain any new parts. Even our vaunted prefrontal cortex turns out to be of typical size: recent neuron-counting techniques classify the human brain as a linearly scaled-up monkey brain.[2] No one doubts the superiority of our intellect, but we have no basic wants or needs that are not also present in our close relatives. I interact on a daily basis with monkeys and apes, which just like us strive for power, enjoy sex, want security and affection, kill over territory, and value trust and cooperation. Yes, we use cell phones and fly airplanes, but our psychological make-up remains that of a social primate. Even the posturing and deal-making among the alpha males in Washington is nothing out of the ordinary.

The Pleasure of Giving

Charles Darwin was interested in how morality fits the human-animal continuum, proposing in “The Descent of Man”: “Any animal whatever, endowed with well-marked social instincts … would inevitably acquire a moral sense or conscience, as soon as its intellectual powers had become as well developed … as in man.”

Unfortunately, modern popularizers have strayed from these insights. Like Robert Wright in “The Moral Animal,” they argue that true moral tendencies cannot exist — not in humans and even less in other animals — since nature is one hundred percent selfish. Morality is just a thin veneer over a cauldron of nasty tendencies. Dubbing this position “Veneer Theory” (similar to Peter Railton’s “moral camouflage”), I have fought it ever since my 1996 book “Good Natured.” Instead of blaming atrocious behavior on our biology (“we’re acting like animals!”), while claiming our noble traits for ourselves, why not view the entire package as a product of evolution? Fortunately, there has been a resurgence of the Darwinian view that morality grew out of the social instincts. Psychologists stress the intuitive way we arrive at moral judgments while activating emotional brain areas, and economists and anthropologists have shown humanity to be far more cooperative, altruistic, and fair than predicted by self-interest models. Similarly, the latest experiments in primatology reveal that our close relatives will do each other favors even if there’s nothing in it for themselves. 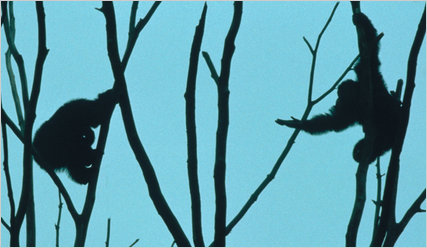 Frans de Waal Maintaining a peaceful society is one of the tendencies underlying human morality that we share with other primates, such as chimpanzees. After a fight between two adult males, one offers an open hand to his adversary. When the other accepts the invitation, both kiss and embrace.

Chimpanzees and bonobos will voluntarily open a door to offer a companion access to food, even if they lose part of it in the process. And capuchin monkeys are prepared to seek rewards for others, such as when we place two of them side by side, while one of them barters with us with differently colored tokens. One token is “selfish,” and the other “prosocial.” If the bartering monkey selects the selfish token, it receives a small piece of apple for returning it, but its partner gets nothing. The prosocial token, on the other hand, rewards both monkeys. Most monkeys develop an overwhelming preference for the prosocial token, which preference is not due to fear of repercussions, because dominant monkeys (who have least to fear) are the most generous.

Even though altruistic behavior evolved for the advantages it confers, this does not make it selfishly motivated. Future benefits rarely figure in the minds of animals. For example, animals engage in sex without knowing its reproductive consequences, and even humans had to develop the morning-after pill. This is because sexual motivation is unconcerned with the reason why sex exists. The same is true for the altruistic impulse, which is unconcerned with evolutionary consequences. It is this disconnect between evolution and motivation that befuddled the Veneer Theorists, and made them reduce everything to selfishness. The most quoted line of their bleak literature says it all: “Scratch an ‘altruist,’ and watch a ‘hypocrite’ bleed.”[3]

Please click on "external source" for the entire, rather lengthy article.

It is a good and thoughtful article, but what he really seems to be talking about is the distinction between evolutionary morality and the highest kind of morality which is born of revelatory religious experience:

You can psychologize evolutionary religion but not the personal-experience religion of spiritual origin. Human morality may recognize values, but only religion can conserve, exalt, and spiritualize such values. But notwithstanding such actions, religion is something more than emotionalized morality. Religion is to morality as love is to duty, as sonship is to servitude, as essence is to substance. Morality discloses an almighty Controller, a Deity to be served; religion discloses an all-loving Father, a God to be worshiped and loved. And again this is because the spiritual potentiality of religion is dominant over the duty actuality of the morality of evolution.

Wouldn't it be great if the truths of The Urantia Book could be broadcast from the rooftops!!!