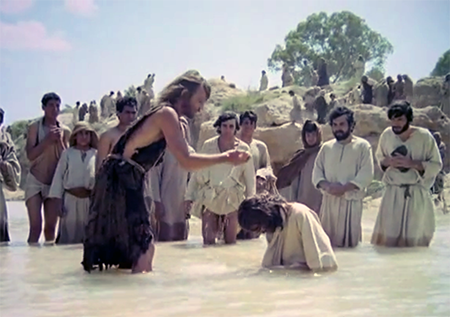 John the Baptist, the controversial self-styled prophet, performed his baptism ceremony upon Jesus of Nazareth and his two brothers at the Jordan River today. Many rumors have developed around the incident, the most sensational involving a strange “voice” heard after Jesus was baptized. The voice allegedly stated: “This is my beloved Son in whom I am well pleased.” James and Jude, the brothers of Jesus, claimed to have heard the voice. John the Baptist also stated that he heard it, but no other corroborating witnesses could be found.

Jesus uttered a prayer immediately following the baptism, declaring: “My Father who reigns in heaven, hallowed be your name. Your kingdom come! Your will be done on earth, even as it is in heaven.” Jesus appeared to be transfixed by some sort of vision and he left immediately after the ceremony. His whereabouts are not known. John spoke of the incident declaring that the alleged “voice” was that of God. He also stated that he baptized with water, but Jesus would baptize with the “Holy Spirit.” Some believe Jesus went into the desert to meditate, and they are anxiously awaiting developments.